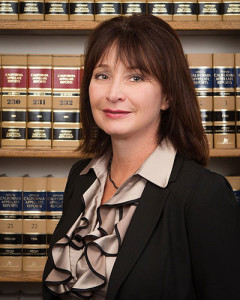 Elan Firpo is an experienced litigator whose practice emphasizes personal injury and other types of tort litigation.  She joined the firm in 2014 as a named partner.  A former senior prosecutor with the Humboldt County District Attorney’s office, Elan Firpo has experience working with the victims of crime and seeking justice on their behalf.

As a Senior Felony Deputy District Attorney, Ms. Firpo was responsible for  prosecuting serious and complex cases, including, murder and attempted murder, sexual abuse, drug manufacturing, domestic violence as well as environmental and financial crimes. In her years at the District Attorney’s Office, Ms. Firpo earned the reputation of a tough, but fair, prosecutor and staunch advocate for victim’s rights.

In 2013, the National Association Mothers Against Drunk Driving (MADD) honored Ms. Firpo with the “Outstanding Prosecutor Award” for her “Outstanding Dedication to Hold Defendants Accountable for Committing the Crime of DUI.”   This award had not previously been awarded in Humboldt County, nor has it been awarded in Humboldt County since.  This award was a national honor of distinction for Ms. Firpo’s steadfast prosecution of cases that resulted in the death or permanent injury of the innocent victims of drunk drivers. Ms. Firpo brings this same commitment to victim advocacy in her civil practice.

Ms. Firpo returned to Humboldt County to be near her parents, and so that her children could know the beauty of the North Coast.   Ms. Firpo enjoys the quality of life Humboldt County offers— especially the local oceans and beaches.  Since returning to Humboldt County, Ms. Firpo has become a certified SCUBA diver and learned to surf in local waters.